Life Cycle Analysis: The True CO₂ Emissions of All Drives

Episodes of The smarter E Podcast

For and with the creators of the new energy world.

A new podcast episode is published every Thursday. Browse the complete list of episodes.

Power2Drive Europe Restart 2021: The End of the Internal Combustion Engine – Many Car Manufacturers are Ready

With the EU’s “Fit for 55” legislation package, the internal combustion engine is set to disappear: From 2035, all new registered vehicles in Europe are to be zero-emission. Many car manufacturers have already adjusted their strategies to be able to hit this target.

Munich/Pforzheim, March 22, 2021 – There is a strong chance that internal combustion engines will become niche products at some point this decade. In 2020, the number of electric cars worldwide rose to 10.9 million, which marks an increase of more than three million compared with the previous year. According to the latest figures from the Center for Solar Energy and Hydrogen Research Baden-Württemberg (ZSW), Germany is at the forefront of these developments, with only China and the USA having a greater number of environmentally friendly electric cars on their roads. In terms of sales figures, Europe is leading the way with Germany in the driver’s seat. The e-mobility industry will present electric vehicles and intelligent charging solutions at Power2Drive Europe, which will be held as part of The smarter E Europe at Messe München from July 21 to 23, 2021.

With a good five million, China has by far the most battery electric vehicles (BEVs) and plug-in hybrid vehicles (PHEVs) on its roads, followed by the USA with 1.77 million. According to the ZSW, Germany has climbed three places to third in the ranking with its almost 570,000 electric vehicles. Electric cars are becoming increasingly attractive thanks to enhanced ranges, ever-improving charging infrastructure to support them and subsidies to make them more affordable. All of this is setting the stage for e-mobility to keep expanding at an unstoppable pace, which could render internal combustion engines obsolete. 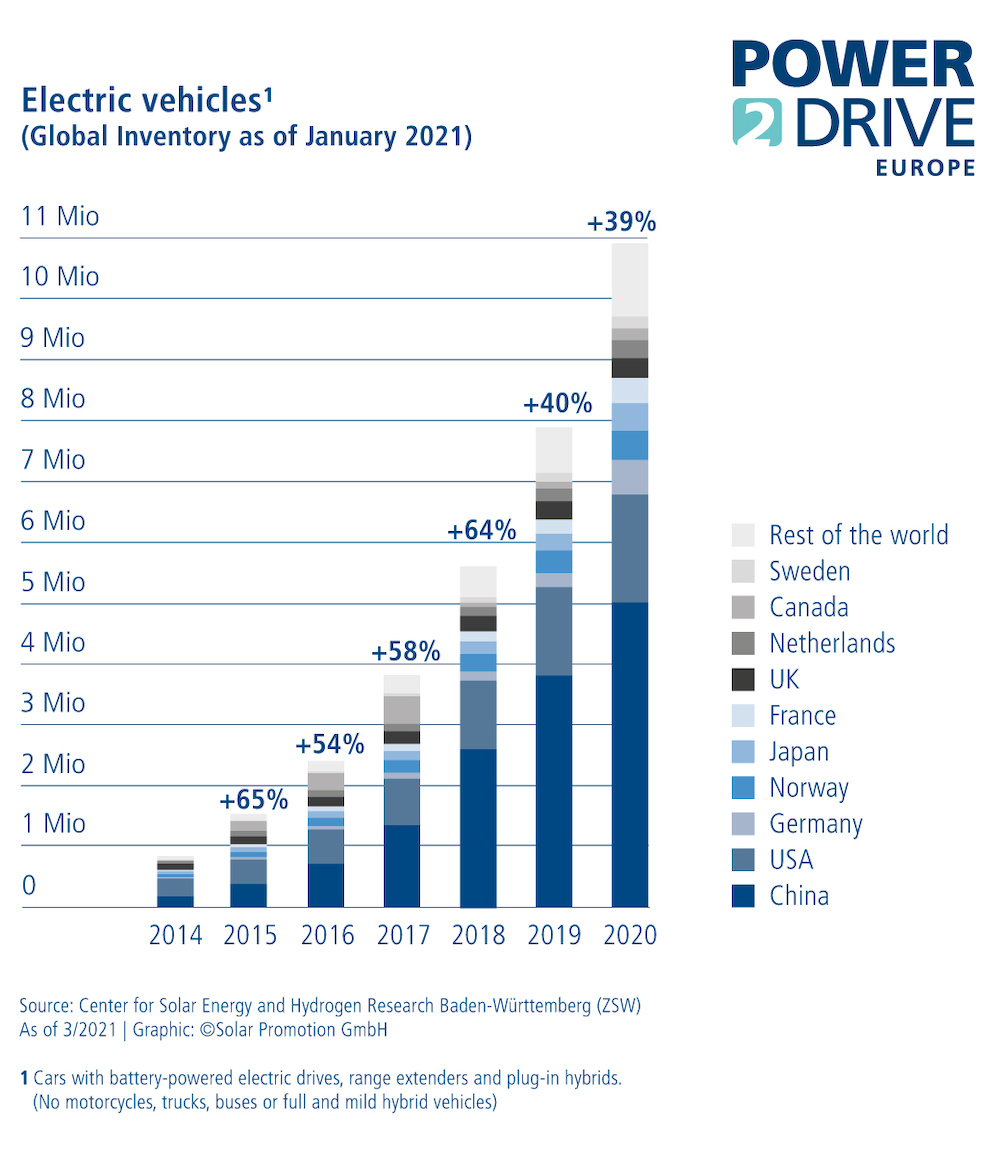 Germany registers the highest number of BEVs in Europe

Figures from EV-Volumes show that nearly 1.4 million new BEVs and PHEVs were registered in Europe in 2020, representing a 117-percent increase compared with 2019. In terms of BEVs, Germany recorded the greatest level of growth across Europe in 2020. According to the Federal Motor Transport Authority, the number of new BEV registrations tripled from 2019 figures to around 194,200, marking an expansion of 206 percent (see graph). This was in spite of the 19-percent drop in new passenger car registrations overall to 2.9 million due to the effects of Covid-19. France occupies second place, having achieved growth of 159 percent with 111,127 newly registered BEVs. The UK is not far behind, having experienced an increase of 186 percent, followed by Norway and the Netherlands. Globally, Germany is second behind China in terms of the number of newly registered BEVs and PHEVs, having pushed the USA into third place. 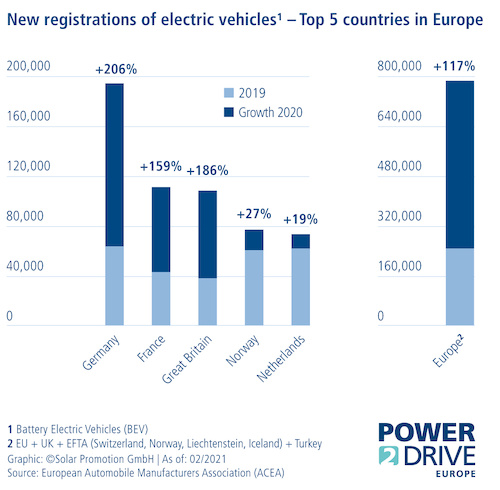 “The end of the ICE age” is nigh

According to a report by the Center of Automotive Management (CAM) at the FHDW university of applied sciences in Bergisch Gladbach, 6.7 percent of all new passenger cars registered in Germany in 2020 were fully electric vehicles. “I am delighted that more and more established automobile manufacturers are putting plans in place to switch to only producing electric vehicles in the near future. ‘The end of the ICE age’ – that is, the end of the internal combustion engine (ICE) – is nigh,” says Joel Wenske, Project Manager of Power2Drive Europe, the international exhibition for charging infrastructure and e-mobility. Espen Hauge from AVERE – the European Association for Electromobility – is of a similar opinion: “The future of the European car industry looks brighter than it did only two years ago. Now there is a real will to embrace the electric future.” The CAM also believes that internal combustion engines will be pushed to the sidelines and become a niche product at some point this decade. With e-mobility representing a crucial part of the European Commission’s Green Deal, policymakers are also playing a major role in this change. The number of new vehicle registrations and the ambitious targets being set by many automobile manufacturers is a clear indication that both the general populace and the automotive industry actively support the political resolve to switch fully to e-mobility once and for all.

CAM researchers predict that Germany will experience strong growth in 2021. The sales volume of new battery electric vehicles is anticipated to increase to around 240,000, meaning that sales values will more than double. With PHEV sales forecast to reach a similar level, electric vehicles are expected to account for 15 percent of the estimated 3.3 million new passenger cars predicted to be registered this year. According to CAM’s forecast, the share of BEVs and PHEVs among all new vehicle sales is predicted to rise to 27 percent by 2025, of which roughly 65 percent will be fully electric vehicles.

Power2Drive Europe 2021 will bring together the industries involved in e-mobility and their intelligent charging solutions. The exhibition will be supported nationally by the German Federal Association for eMobility (BEM) and internationally by AVERE – the European Association for Electromobility. The international exhibition will be held as part of The smarter E Europe at Messe München from July 21 to 23, 2021, under the motto “Charging the future of mobility.” The new energy world and the evolving mobility world are becoming increasingly intertwined, with each sector benefiting from technological advancements of the other. At The smarter E Europe innovation hub, stakeholders in the energy and mobility transitions will come together to present their innovations and demonstrate the increasing interconnection between the power, heating and transport sectors.

Here you will find the exhibition dates of the next years.

Large-scale fossil-fueled power stations and nuclear power plants have been stabilizing the power grid until now but the energy transition is going to change that. The last nuclear reactors in Germany are due to be shut down by the end of 2022. And the plan is to phase out coal altogether by 2030. Before the war in Ukraine, gas-fired power plants were pegged as a transition technology. But now there is no choice but to rethink that strategy.

Job offers of exhibitors of The smarter E Europe.