Munich/Pforzheim, October 6, 2021: Green hydrogen will play a crucial role in the climate-friendly energy mix of the future. The Green Hydrogen Manifesto, which was presented today as part of The smarter E Europe Restart 2021 at Messe München, provides valuable insights and inspiration on how to promote the use of this energy source. With this manifesto, the initiators Hydrogen Europe, German Hydrogen and Fuel-Cell Association DWV, European Electrolyzer & Fuel Cell Forum EFCF and The smarter E Europe aim to send a clear signal in favor of decarbonization and a sustainable circular economy.

Whether it’s the Fit for 55 package in Europe or the forming of a new government in Germany: A new foundation is being laid – also for the energy market of the future. Green hydrogen is a key element for a climate-neutral economic system. As a main feature of a sustainable energy supply, green hydrogen enables intelligent networks across the energy, heating and transportation sectors. Under the heading “The Green Hydrogen Manifesto”, the manifesto aims to help drive the advancement of green hydrogen in Europe. “Against the backdrop of the current realignment in politics, our manifesto aims to encourage decision-makers to factor in green hydrogen – whether in the energy sector or the economic sector,” says Werner Diwald, Chair of the German Hydrogen and Fuel-Cell Association DWV. “Because hydrogen that is produced from renewable sources is not only important for the energy transition. More importantly, it also provides huge opportunities for the economy of the European Union.”

Europe as a model for the introduction of green hydrogen
Along with the German DWV, authors of the manifesto include Hydrogen Europe as the European umbrella organization for the hydrogen and fuel cell industry, the European Electrolyzer and Fuel Cell forum EFCF and The Smarter E Europe, the innovation hub for new energy solutions. The manifesto is aimed at policy makers in the European Union as well as national governments and politicians. “We want to show policy makers how important green hydrogen is for a circular economy and decarbonization, and motivate them to take action,” says Jorgo Chatzimarkakis, CEO of Hydrogen Europe. “In the future, Europe must lead the way in introducing this energy source while also ensuring and enhancing prosperity and prospects. That is our responsibility for the future and for climate protection.”

The manifesto defines how Europe can live up to its leadership role by laying out twelve demands, including a guiding framework and targeted incentives as well as measures to ramp up production volumes and reduce costs. The first demand is: The CO2 content of energy carriers should serve as the new currency for energy systems. Other specific recommendations include, for example, the certification of hydrogen as a global commodity, the appointment of a dedicated EU Hydrogen Special Envoy in charge of driving forward the EU Hydrogen Strategy and partnerships with third countries, and a legal framework at the EU level for the regulation of hydrogen networks.

Presenting to international trade visitors
This manifesto was presented at the Green Hydrogen Forum, part of the innovation hub The smarter E Europe Restart 2021, which is still taking place in Munich until October 8. Oliver Bucheli, President of the European Electrolyzer and Fuel Cell Forums: “With its focus area Green Hydrogen Forum & Expo, ees Europe Restart 2021 was the perfect setting to present our manifesto to an international expert audience and win over supporters. Green hydrogen will only be able to establish itself on the market with active support from the economy, science and policy makers. Europe has the means to be a worldwide leader in this industry.”

Shortly after its publication, as many as 54 companies and organizations have signed the Green Hydrogen Manifesto as a sign of their support. Some of the first to sign include SAIPEM S.p.A., Forschungszentrum Juelich, Haldor Topsoe AS, the German Federal Association for Combined Heat and Power (B.KWK), ITM Power, Paul Wurth GmbH and Deutsche Kreditbank AG , among others. The large number of signatures demonstrates the importance of the demands to policy makers, according to Markus Elsässer, CEO of Solar Promotion GmbH: “We are pleased that we are able to draw attention to an extremely relevant energy issue with the Green Hydrogen Forum and the Green Hydrogen Manifesto.”

Supporters can still sign the manifesto on site at ees Europe Restart 2021 until October 8. In the closing session of the Green Hydrogen Forum in hall B6 on October 8, from 2:45pm–3:30pm, the manifesto will once again be discussed. Associations and industrial companies who are interested in openly showing their support can sign up using the following link: www.thesmartere.de/hydrogen-manifesto/become-a-signatory

Find out more about all of the demands in the manifesto and all signatory logos: https://www.thesmartere.de/green-hydrogen-manifesto 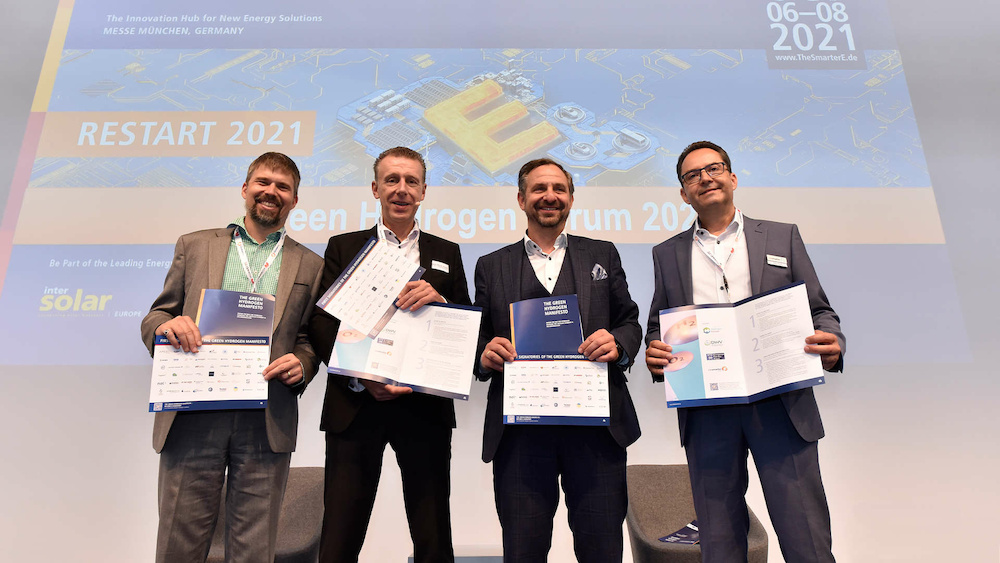